A History of Gambling in New Zealand

Many people don't associate gambling with New Zealand, so they might be surprised to know that Kiwi's love their gambling games. New Zealanders enjoy gambling and have done for years - various forms of gambling have been popular since the first European settlers went there. It was mostly informal unregulated gambling until the Gambling Act of 1908 was passed. 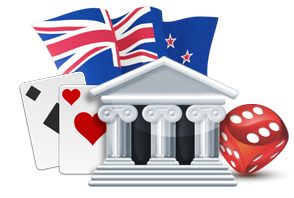 In 1877 lotteries were born, the Otago Art Society held the first ‘Art Union’ in New Zealand. It was originally a way for people to invest a guinea or more to be in the draw to win a work of art. This is where the name ‘art union’ originated. New Zealand artists began their own art unions from the 1860s and the idea was thereafter used as a general fundraising mechanism.

Meanwhile, informal lotteries were run by clubs, businesses, and even municipal authorities. Because the concept of gambling was frowned upon at the time, the name ‘art union’ was used for all of these lotteries even if they had little to do with art works.

By 1930 there were about ten "art union" lotteries and they earned between £10,000 and £20,000 each. In 1932, the government appointed the Hammond and McArthur Company Ltd to run all national lotteries on behalf of the state with the profits being distributed to worthy causes. However the early lotteries had a lot of problems.

The prizes were very modest and many people purchased tickets from other illegal lotteries. This led to sales starting to fall within the "art unions".

The 1950's saw many changes, with two in particular taking centre stage. In 1950, the Labour government began a large review of lotteries and wanted more input and regulation. This led to the forming of the "Golden Kiwi Lottery" ten years later. Things were changing within horse racing too.

In 1951, the Totalisator Agency Board (TAB) was formed and has since been the only legal horse race betting operator in the country. Horse racing in New Zealand really started to take off. Horse racing has been a popular sport in Australia and so it wasn’t any surprise that New Zealand became horse racing fans too, the 1950's saw a huge leap forward in terms of interest and participation in the sport.

Just prior to the 1990's the National Lottery was formed in 1987, there have also been several games added to the basic lotto since. Games such as Lotto, Powerball, and Strike are now played twice a week (Wednesdays and Saturdays).

New Zealand’s first legal casino opened in Christchurch in 1994. Today, there are also casinos in Auckland, Hamilton, Queenstown, and Dunedin. The largest operator is the Skycity Entertainment Group running the casinos in Auckland, Hamilton, and Queenstown. They all offer numerous gambling games and excellent entertainment, this gave birth to online casinos after the arrival of the internet.

The first international online casinos started operating in the 1990's. Kiwis over the age of 18 may legally gamble at online casinos that are based offshore and this is how all New Zealanders gain access to them. The local population loves their casinos both land based and online. In fact, land based casinos are more than just gambling establishments, they're considered places of recreation and entertainment. All the major land based casinos that opened during the 1990s started to offer functions and entertainment away from the pleasures of the gaming tables.

Pokies (or slots machines as they are known elsewhere) were introduced to New Zealand in 1991. These legal pokies machines are normally located at casinos but are also found at clubs and pubs. There are now more than 16,000 of them operating at more than 1,300 venues.

The arrival of a new millennium meant the arrival of the internet in an ever growing number of homes all over New Zealand. In 2003 the new Gambling Act governed all gambling activity within the country and the 2003 Racing Act was put in place to govern all sports betting and racing within New Zealand.

Lotteries were changing again because since 2008, Lotto tickets could now be bought online and a certain percentage of the profits were returned to community groups through grants. It was the arrival of the online casinos throughout the decade that really saw a huge shift in the gambling habits of New Zealanders.

Now they could play all the classic casino games from the comfort of their homes. Hardware was getting better and connection speeds were becoming faster, broadband was introduced and fiber optic made online gaming even better and more accessible. Personal computers also became a common site in every home in New Zealand.

So What About the Future?

More and more online casino games means more and more choice. Online live dealer games are breaking down the barrier between experiencing real live casino play and playing online, and with current developments in virtual reality technology it's only a matter of time before gambling also offers a VR experience.

Security technology is also improving, meaning that worries about the safety of your financial and personal details can be left far behind.

It's going to be an interesting few years for the world of online gambling and casinos, and we're making sure to stay at the forefront of any changes or developments that occur so we can keep you updated!

Related topics for you